The Willys CJ2A, the first mass-produced Jeep intended for the civilian market, began production on July 17, 1945.  Most people know that civilian Jeeps evolved from the model MB of World War Two fame, but few realise that the CJ2A had two civilian ancestors:  The CJ-1 and the CJ-2.  By 1944, the Allies were confident the war would be won.  This allowed Willys to consider designing a Jeep for the post-war civilian market.  Documentation is hard to come by, but it seems that a CJ-1 (for "Civilian Jeep-1") was running by May of that year.  The CJ-1 was apparently an MB that had been modified by adding a tailgate, drawbar, and a civilian-style canvas top.  None of the CJ-1s built have survived, and it is not known (at this writing) how many were built.

The CJ-2s, also known as "AgriJeeps", were a further evolution of the design and appeared sometime in 1944 or 1945.    They had tailgates, Power Take-offs ("PTO"s), engine governors, column-shift T90 transmissions, 5.38 gears, 2.43:1 low-range transfer cases, and driver's-side tool indentations.  The earlier models had brass plaques on the bonnet and windscreen that read "JEEP".  Later models were stamped "JEEP" a la the familiar "WILLYS" stamping that appeared on the CJ-2A and later models.  Some CJ-2s had "AgriJeep" plaques affixed to the dash.  The spare tyre was mounted forward of the passenger-side rear wheel on the earlier models and aft of the rear wheel on later ones. It seems that CJ-2s were distributed to "agricultural stations" for evaluation purposes.  Of the 45 CJ-2s built, serial numbers CJ2-09, CJ2-11, CJ2-12, CJ2-32, CJ2-37 and CJ2-39 have survived.  Only CJ2-09 has been restored. *


2 March, 2001:  Todd Paisley e-mailed the following information about other CJ-2s that have been discovered:  "CJ2-06 is in Massachussets.  CJ2-14 is currently in PA (I am using it to duplicate some parts for CJ2-12) but someone from Colorado bought it.  Fred Coldwell of Denver owns CJ2-26."  So it looks as if nine of the CJ-2s have been accounted for.  There was a question about the existence of CJ2-39.  If it actually has not been discovered, then there are eight. 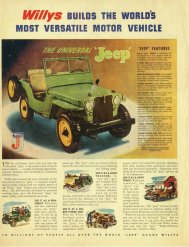 The CJ2A marked a noticeable change in the appearance of the Jeep.  The MB had recessed headlights and nine-slot grilles.  The CJ2A had larger headlights flush-mounted in a seven-slot grille.  The headlight trim rings, which were body-colour, (Harvest Tan or Pasture Green) became chrome with CJ2A s/n 38687 in 1946.  The T-84 transmission, which was considered weak, was replaced by the stronger T-90.  The earlier CJ2As had column shifts -- "Three on the Tree" -- until it was changed to the floor shift on s/n 38221.  But it was still powered by the reliable 134 cubic inch, 60 horsepower "Go-Devil" engine.

Extra equipment for the new civilian Jeep, now called the "Universal Jeep" (or later, the "Jeep Universal") was a King-Seeley governor, Monarch governor, rear PTO, front PTO, pulley drive (front and rear), canvas body enclosure ("top"), metal body enclosure, capstan winch, 265-pound front bumper weight to equalize the load on the wheels, heavy-duty springs, and pintle hooks.  The PTO could power a large assortment of equipment including the capstan winch, hydraulic lift, mower, discer, bailers, generators, welders, cultivators, plows, field cutter, harvesters, grain separators, saws, post-hole augers, and other farm and industrial gear.  According to an early brochure, the Jeep could "pull a 5,500 pound load on the highway at a good speed."  Much was made in the early advertising about the versatility of the "four vehicles in one" Jeep.  "Now it's a Truck... Now it's a Tractor... Now it's a Runabout... Now it's a Mobile Power Unit" **

Colour options were limited in 1945 and the first half of 1946:  Harvest Tan or Pasture Green.  For the rest of the CJ2A's production life, there were seven additional colours:  Harvard Red, Michigan Yellow, Princeton Black, Picket Grey, Luzon Red, Normandy Blue and Olive Drab.  Emerald Green was also available in 1948.  For examples of these colours, see the Paint Chips Page.***

30 July, 2001.  Fred Coldwell sends corrections to this page.  He is writing a book on preproduction civilian jeeps.

"I have not yet heard about CJ2-39, and was not aware someone claims it exists.  No one has mentioned it to me yet, but of course that doesn't affect whether or not it actually exists.   Who claims to have seen it?  [Jim Allen mentions s/n CJ2-39 in his book JeepIllustrated Buyer's Guide. -- JW]

I know of eight preproduction jeeps that exist as of today.  Five are the pilot model CJ-2 that has the cast bronze name plates and the spare tire mounted just behind the passenger entry: CJ2-06, CJ2-09, CJ2-11, CJ2-12 and CJ2-14.  Three are preproduction model CJ-2s that have the
stamped JEEP name and the spare tire mounted at the right rear corner: CJ2-26, CJ2-32 and CJ2-37."

* CJ-2 and CJ2A figures were obtained from Jeep Illustrated Buyer's Guide by Jim Allen, ©1999
** Equipment information obtained from Willys presents The Universal 'Jeep', an eight-page newsprint advertising flyer.  Photos from the ad will be posted at a later date.
***Paint chips are from Sherwin-Williams documents O-103-N-46 7-50 780 and O-103-N-47-48 7-50 780 published in 1950.  Chips on the Paint Chips Page were created using Ulead Photoimpact and were matched by the author to the original documents.  Sherwin-Williams original part numbers for the paint are provided under each colour, and the original formulas are provided in adjacent charts.  Use the original numbers and formulas for an authentic match, but bear in mind that the original paint numbers are obsolete.

Return to The CJ2A Home Page